"We are not stoning you for a good work but for blasphemy. You, a man, are making yourself God."
John 10:33

This reminds me of one of my favorite stories about St. Edith Stein.  Remember her? She was the Jewish woman who was a philosophy scholar in Germany, pre-WWII.  As a result of her studies (of St. Teresa of Avila) and the influence of Catholic friends, she became a Catholic and later a Carmelite nun. She was killed at Auschwitz in 1942, at age 50.  My favorite story is when she finally told her Jewish mother that she was joining the Carmelite order. She had just been living with the sisters while teaching at their school. She told her mother that she was actually going to join the order and be a Carmelite nun. Her mother was quoted saying, "Why did you have to get to know him (Jesus)? He was a good man--I'm not saying anything against him. But why did he go and make himself God?" ("Edith Stein--A Biography," by Waltraud Herbstrith). Isn't that fascinating? We have  two thousand years of history and the deep faith to know that Jesus is God. The people of his time and even Jewish people throughout history see it so differently.  So ponder-worthy, this last weekend before Holy Week. And as we ponder and pray, let us remember that the Jewish people are, and always have been, so richly and completely loved by God. They are our brothers and sisters under our father Abraham. Love, heidi
Posted by heidi at 6:03 AM No comments:

"Blessed are you, O Lord, the God of our fathers, praiseworthy and exalted above all forever..."
Daniel 3:52

Pray-as-You-Go had a lovely little exercise surrounding this today...inviting us to think about what we would praise God for on this day.  That's easy for me, having just spent a fabulous weekend with three out of four of my kids! I was thinking how funny it is: I did a good deal of pondering and nourishing my relationship with God in my early twenties. Then busy family life began and I was caught up in a whirlwind of all of that for thirty years. Now, here I am again, on my own pondering and nourishing my relationship with God. These God-times are like bookends of my life--times of awareness, while the years in between are somewhat of a blur to me.  I spend time this late-Lenten Wednesday praising God for it all.  I relish each phase, each period of life, as I look back.  I see how God was there through it all, even as I was so caught up living a busy life.  The constant through it all is God...who is definitely praiseworthy and exalted forever!  Let's all ask ourselves today...what do we praise God for this very day? Love, heidi
Posted by heidi at 5:46 AM No comments:

I love that the people just come right out and ask Jesus, "Who are you?" Indeed, it's a good question for us to pray with these last two weeks of Lent. Who IS Jesus in our lives? Is Jesus an historical figure who lived in a confined period of time and place? Is Jesus still alive in our lives today or do we relate to him only as he was then? Is Jesus someone we think about Monday through Friday or only on Sunday? Is Jesus merely symbolic to us or is Jesus real to us? If we haven't really gotten into Lent this year, we can spend the next couple weeks praying and pondering these questions in our own lives. Who, exactly, are we celebrating on Easter? And what does this whole deal mean in our own work-a-day lives in 2017? We're in the home stretch, Friends...let's spend some wonderful, peace-filled time with alone. With God.  Love, heidi
Posted by heidi at 5:46 AM No comments: 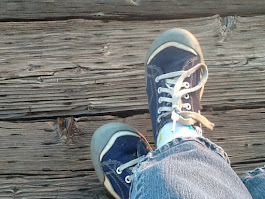