Fleeing to the desert...

"We don't come to the monastery to get away from suffering; we come to hold the suffering of all the world."
Thomas Merton, as quoted in Richard Rohr's Daily Meditation, 10/5/2017

Tonight, I head over to the western side of the state to begin my five day silent retreat at Marymount. I shared with Sister Beverly that I have never felt more need to retreat...to get away from the suffering of this country and world, but, I see that going on retreat I can learn to hold the suffering instead of escaping it. Even as I can escape the news when I am unplugged at the hermitage, the images of the suffering of our fellow humans beings, be they hurricane victims, refugees, immigrants, or those running from crazed gunfire, are still in my mind and heart. No, I will not be getting away from the suffering, but as I tune into the Holy Spirit in the silence, I can learn to hold it and somehow allow it to transform. And, as always, anything I glean on retreat I am meant to share when I return. Dear Friends, you will all be in my prayers at the hermitage, and will place your intentions on the altar while there.  Much love, heidi

"As Jesus and his disciples were proceeding on their journey, someone said to him, 'I will follow you wherever you go.'"
Luke 9:57

Following Jesus with just our opinions could be hard enough. We would need to be against war and violence of any kind. We would need to forgive. We would truly need to welcome the stranger, lovingly instead of fearing those who are not like us. In fact, we would need to abandon fear all together. Jesus didn't seem to fear anyone or anything, did he?  But, as hard as sharing the same opinions of Jesus, the really hard part would be following his actions. We would need to live simply, since Jesus had "nowhere to his head," (v. 58). We would need to physically embrace those on the fringe, those our society rejects. Now it's getting harder! Maybe it would be easier to follow St. Francis, whose feast we celebrate today? After all, his life looks a bit charming in the movie, "Brother Sun, Sister Moon," doesn't it? That is until he strips naked in the middle of town and walks away from his wealth and family; the townspeople aghast and jeering. OK, so radical discipleship isn't as easy as we'd like it to be. But as Tom Hanks says in "A League of Their Own" about baseball, "If it was easy, everyone would do it!" Today, in honor of St. Francis, let's do the harder thing. Let's take concrete action today to recycle if we don't already. (And maybe ask ourselves Why don't we already?) Let's embrace someone who we may find difficult. Let's reach out to a stranger who we may feel a bit leery of. Let's be simple in our choices today...simple meals, fewer frills, more awareness for the other guy. Let's try to be a bit more radical in our discipleship today! Love, heidi
Posted by heidi at 5:48 AM No comments:

Close to the brokenhearted...

"The Lord is close to the brokenhearted, and those who are crushed in spirit he saves."
Psalm 34:19

Last night, I was sitting in the candlelight, praying for the tragic events of yesterday. I wondered what I could possibly share that would be hope-filled and positive.  I was reminded of a book I just finished called "Sacred Fire: A Vision for a Deeper Human and Christian Maturity," by Fr. Ron Rolheiser. In it, he talks about how we can bless one another. We bless each other when we share our appreciation for another's gifts. When we encourage, support, and lift each other up. We bless each other when we recognize the efforts of others and show them our gratitude. We encourage each other with God's love, a love beyond ourselves. Today, as we continue to struggle with the horrific hurricanes, earthquakes, and now the mass shooting tragedy in Las Vegas, let's all make a special effort to bless all the people we encounter today. We may feel helpless to assist those in Puerto Rico or Las Vegas, but we can love and bless those in Idaho Falls, Boise, Leavenworth or wherever we find ourselves. People will cross our paths, stand next to us in line, maybe they even need us for special help or assistance. Let's bless them, each and every one of them. Let grace come forth from our hearts to touch others today. Beautiful ripples of grace will go out through our hurting world.  Bless you, all, my Friends...Love, heidi
Posted by heidi at 4:55 AM No comments:

Just do it! With love!

I have noticed an interesting thing as I inch (and I mean at a elderly snail's pace) toward retirement. I find that I have more zeal for my job than I did years ago. Doesn't this seem like the opposite of the typical case? Four years ago, I went on my first retreat at Marymount Hermitage and had a real breakthrough about my work. I had prayed to have a spiritual vocation, a "holy" job, as such.  The message I received from Jesus was this: "You already have a holy job...just do it a better." I remember feeling so enlightened that I called coworkers on the way home and apologized for my lackluster performance since I'd been phoning it in for years. I vowed to do better. I wish, at this point, to say that I did just that, but, alas, again, I move at a snail's pace. Anything we do with love and for the glory of God, is a spiritual vocation. I feel like the son in Jesus' story. I whine about my job, but if I go out and do it, with love, to the best of my ability and for the glory of God I am doing God's will.  Let's all do that today! Love, heidi
Posted by heidi at 6:01 AM No comments: 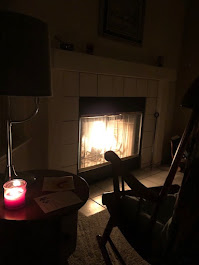